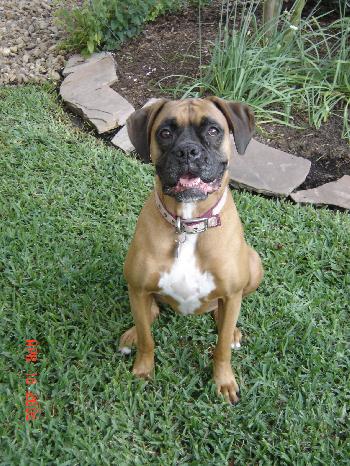 Abbey joined our family in July 2001 when she was approximately 6 ½ months old. We adopted her through Lone Star Boxer Rescue (Houston). We want to especially thank Sharon for mentioning Abbey to us as she was a perfect addition to our family!

Abbey was an exceptional dog--really more like a person. She brought many years of joy to our lives. Abbey has crossed the rainbow bridge is now gone and will be missed forever. She has certainly left her paw prints all over our hearts!

Abbey was diagnosed with Spleen Cancer on October 20, 2009. She had an enlarged heart along with fluid in her lungs. Abbey’s days of suffering were short as she passed away in her sleep the morning of October 27, 2009…just one week later. We gave her unconditional love up until the day she passed away!

We know that our special pets are extraordinary gifts that we believe are given only to those of us who can truly appreciate them and hold them close to our hearts. Abbey was one of the special ones - friendly, loyal, a real sense of how to best own a human, courage to train that human, and a great heart. Each day was enriched just by having her near us. We know that Abbey had a good life with a couple of the best of humans she could have lived her life out with here on earth. Like all dogs, she loved unconditionally and was loved unconditionally. That's the highest any of us - human or canine - can really hope to achieve in a lifetime. God gained a beauty of a spirit and soul yesterday.

Good Bye our sweet Abbey and enjoy your times romping around with your friends in Heaven! 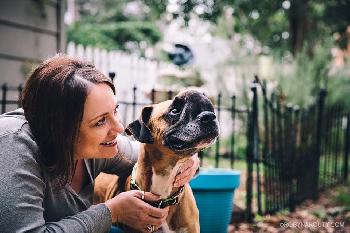 Adalard (Addy)
We couldn't save you from the tumor that consumed your brain but we got you off the streets and into a wonderful, loving foster home for the little time you had left. You left a little imprint on our hearts.....RIP sweet Addy and run free! 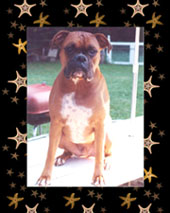 Adrian
In memory of Adrian from his mom, Christine Walsh
LSBR Archive - 2002 and earlier 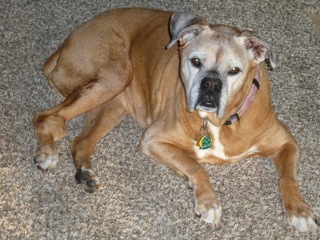 Allie (2003-2015)
Sadly, we report that we had to euthenize our LSBR girl, Allie, today. We adopted her as a peppy 4 year old in June, 2007 – drove all the way from Dallas to Houston and back to get her, and she has given us 8 1/2 years of love, joy, protection. She will be so missed. She was so unique. First boxer we ever had that had curly hair on her back side – yes, curly! Over the last few years her face has gotten so white we thought she was turning into a white boxer! She was always very attentive and protective – she always sat where she could see the front door and sometimes the back door as well, and would let us know someone was coming to the door even before they got there. She was the first boxer we have had that did not inhale her food! She would daintily eat a little bit, then walk around a little, then back to eat a little more, then walk around some more. It took her forever to eat! She survived 4 male rescued boxer companions (1 from LSBR and 3 from Legacy Boxer Rescue here in Dallas). And we have managed to keep her going these last 6 months despite an ever-enlarging mesenchymal tumor that started in a lower joint in her right hind leg and has slowly grown to the size of a lumpy tennis ball. The vets felt the only thing that could be done was amputate the leg, and at the age of 12+ we did not feel that that was an option, so we gave her 6 more months of love, and now the tumor has grown to a size where it is restricting her walking and causing her pain. So we felt it was necessary to send her to the rainbow bridge with our last few hugs. We love LSBR for bringing her into our lives, and we will miss her greatly! We have decided to hold off looking for another female right now because the male we now have is a true chauvinist and will probably do well without her – better than we will! 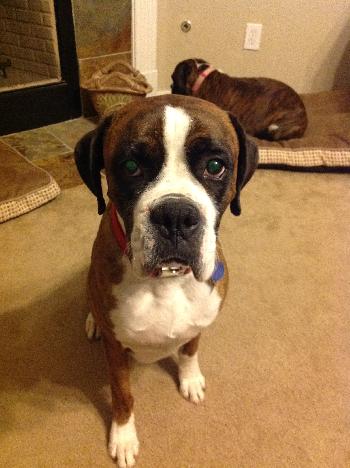 Amos (aka Buckethead)
Allan and I made the difficult choice to send our sweet boy over the rainbow bridge today. What was known as his occasional quirkiness during his high speed sprints ultimately proved to be degenerative myelopathy after extensive testing. In less than 2 weeks he went from a slip here and there during playtime and walks, to us using a towel to hold up his back end....then....having to carry him Sunday Even though I'm crying as I type this, I am soo happy for you buckethead. You can finally run and play again and know that you will always be in our memories and hearts. I will miss your slobber on my clean clothes, walls and furniture. I will miss you drinking out of the faucet while I take a bath. I will miss our weekend coffee on the patio. I will miss you. Your Mom, Sheri