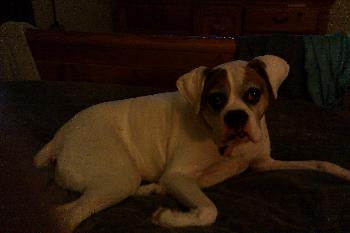 Iris
With great sadness and heartbreak we said goodbye to our sweet little Iris on 01/20/2012. This was one of the hardest decisions of our lives, but we knew that it was her time to go and we did not want her to be in pain. We feel very blessed to have had Iris in our lives, even if only for a short time. Iris was such a special pup and we miss her so very much. She touched our lives in so many ways and we cannot express how grateful we are that you, Alicia, took a chance on us. We could never wrap our minds around why anyone would have or even could have dropped her off at the pound. Iris had to have been one of the sweetest if not the sweetest dog ever! Her personality and little quirks, like grunting like a little piggy and trying to eat Duke's toenail clippings to the way she would tuck her little butt and take off running around the yard and house or how she thought clothes and blankets on laundry day were her bed, made her one of the most amazing lovable pups! Anywhere we went, people automatically fell in love with Iris. We had several friends and family members ask why we chose a deaf boxer, and I would always tell them, well, Jesse and Iris kind of chose each other. And I would always tell them the story of how Iris became a member of our family...How we had originally inquired about a few other boxers wanting to find a companion for our other boxer Duke and that Duke did not make the drive to Houston with us, so we had to make the decision without him. And the day we went to the rescue we had no idea we would be coming home with a deaf boxer. We were introduced to a few boxers, but did not feel they were the right fit. But sweet little Iris was a whole other story. Jesse knew from the moment he had seen her she was the one. Even before we knew anything about her or was introduced to her, he knew Iris was the one! When we were finally introduced to Iris, Jesse knelt down, Iris stepped up onto his lap, and gave him a little kiss. At that moment, she stole my heart and I knew she was the one. I also knew in that moment there was no way that we would be able to leave without her. And the fact that Iris was unable to hear, never mattered to us. She was a very smart dog and even though she could not hear our voices, we felt she always knew when we were talking to her. Iris instantly became a part of our family. Within the first 24 hrs, Duke was teaching her how to sneak onto our bed at night and how he liked to wake us up for breakfast. She was like our little shadow, always following us around the house...especially on house cleaning days. Iris was truly one of the best and will forever be in our hearts. Our sweet, sweet little Iris. You stole our hearts and made our family whole! No words can truly express our love for you. We miss you so very much. Love Mommy (Marie), Daddy (Jesse), & Duke