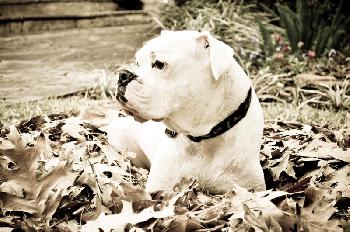 Feisty
My husband and I have adopted Feisty (LSBR Foley) in Spring of 2004. We were so excited to take him home with us. He was a little skiddish at first, but once he got to know people, be wouldn't stop kissing them. He loved running around doggie parks and just followed us everywhere; he always wanted to be with us like a little tail. He filled our life with so much love and beautiful memories. In July 2010, Feisty was diagnosed with Lymphoma and passed away on December 14th, 2010. We miss him terribly. 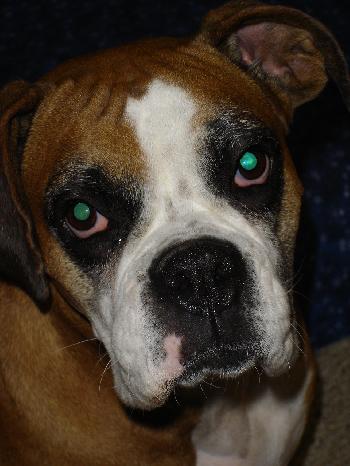 Finley
Our precious girl Finley crossed the rainbow bridge on March 15, 2012. We were blessed to spend 6 ½ short but wonderful years with her. Our time with her started as “foster failures” because we fell in love with her and couldn’t give her up. She made us smile and laugh with her antics even when we were having a horrible day. She thought everything was a wonderful fun game – chasing the vacuum cleaner, playing with her toys, chewing up expensive text books, chewing up Christmas ornaments hung on the bottom of the tree, disassembling the Christmas tree skirt, opening Christmas presents left under the tree… Finley had a fascination with everything new – each day was a day to see something new and exciting. She had a true joie de vivre and it was contagious. She would race to the window when she heard the garage door to see if it was true – are they home? She would bark with excitement!! – Hooray for a walk! Hooray for treats!! Hooray mom and dad are home!! She was an “all natural” boxer with floppy ears and a tail. She would wear her heart on her shoulder with that tail which was a window into her sweet soul. She, like any boxer, would do the “boxer” wiggle and would turn her butt to the side so much that she hit herself in the face with her tail. She was also a professional drooler – we still find her drool in our car, on our walls – a happy reminder of our girl. She holds a special place in our hearts and is with our friend Chance now waiting on the other side of the rainbow bridge for us to arrive. We miss you!
- Holly, Jerimy and Onyx 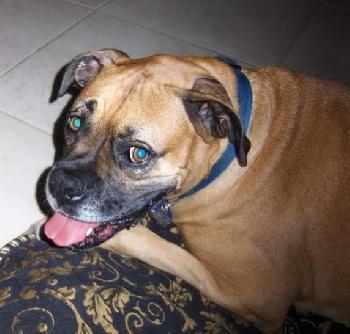 Fletch
Nine years ago we adopted Fletch. The folks who were his foster parents were very taken by Fletch as evidenced when they brought him to our home the final visit. After 9 terrific years we lost Fletch, or Fletcher Boy as he became to be known this past weekend. I wanted to inform his foster family of our loss, and thank them for their part in giving him a fresh start on life. He brought us immeasurable joy. The Kay Family 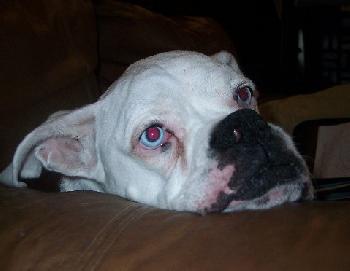 Fluke Pickard
6 years ago, I received a call from my veterinarian, a white boxer had been abandoned at his clinic with a broken leg, he suspects from a beating. He was unable to set the leg, but referred the clients to another veterinarian. 3 months went by, they did not pick up their dog. I went to the clinic, took one look and fell in love with her. I did however have a houseful of dogs, so decided she would be better placed with a boxer rescue in Houston. The arrangements had been made for 1 week. In the course of that week, my daughter, my husband and I all fell head over heals for Fluke.. she could NOT go to boxer rescue, she was a part of our family now. Fluke had to be treated for heartworms, she had to be spayed, she had been used a puppy mill. After all this was taken care of the vet had said in order to fix the broken leg, he could only at this time do an amputation. I made the arrangements for this procedure and she started using the leg. The vet refused to do the amputation. She had a limp, but could run like the wind. Over the course of the years, Fluke was always by my side, helping care for orphan pups and kittens being brought in. Every where I went, Fluke went to.She was my shadow, sidekick, best friend. She had the most gorgeous crystal blue eyes you've ever seen. She had such comedic ways about her, every one loved Flukey. Last April 2006 she woke up and was falling down, stumbling. We joked with her, that she had better stay away from the liquor cabinet. I actually thought she may have had a stroke as the day went on and her condition worsened. If only that had been the case. Fluke was diagnosed with an inoperable brain tumor. Needless to say I was grief stricken. I took her to Gulf Coast Veterinary Clinic in Houston. Her oncologist, Dr. Glen King is WONDERFUL. ( He called her the " Kid" ) Fluke immediately started radiation therapy, 21 total. I had my Flukey back!! She was home, running and playing in the yard, aggravating what ever dog in the house she could, just being her old self again. She continued receiving accupuncture and chinese herbals from Dr Harris at GCVS. In April 2007, we had another CT scan of the tumor ran to make sure all was still going well a year later. The scan showed the tumor had shrank somewhat, but the mass was less defined. Dr King was very pleased. . Sadly, Fluke took ill again in June, vomiting for unknown reasons. After many trips to ER Vet and her own vet, she was diagnosed with Mega Esophagus, in the course of that, the brain tumor reared its ugly head again. She was in and out of the vet clinic and had started radiation treatments again. She fought very hard to be strong and keep living, and I fought right along with her. Despite all the love and care from ALL her docs, the staffs, and us, Flukey just could not fight any longer. She went to Heaven on July 18, 2007. We will all miss her til our dying days. Rest In Peace My Gorgeous Girl, I love you. 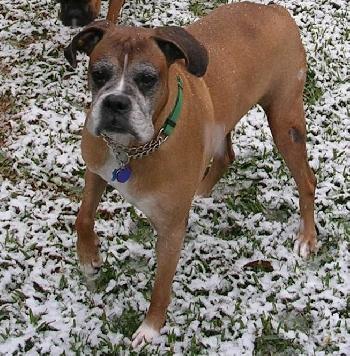 Fred
Fred came to us late 2008 initially so we could foster. We instantly bonded and not long after that we adopted him. Fred was extremely calm and mild-mannered but he did love to play fetch as well as drink from the garden hose. --Missed by Alex R & family