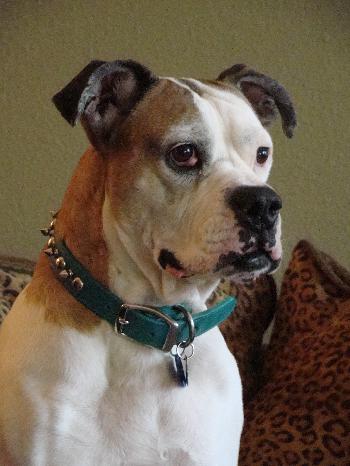 Valentino
My sweet baby boy, my boy Val. I loved you so much. I remember the day I met you. Miss Ann brought you to the house to meet us after she had picked you up from a shelter in Dallas. A shelter worker there saw something in you, saw something in your eyes I suspect, that revealed what was inside of you. A sweet, tender, gentle boy that just needed someone to keep him safe. You had been through so much already at the hands of humans who didn't love or care for you but you were still brave enough to trust this kind lady. And then Miss Ann and then me. You gave us all a run for our money, bit everyone at the vet clinic you could get to that first night. Sorry Dr. Sartor! But over time, with a little love and basket of you own toys - FINALLY your very own toys! - you came around. You soldiered through your heartworm treatment and all the little surgeries to remove growths from your skin. Getting braver and braver every vet visit. Eventually Dr. Sartor declared you "the most reformed dog at the clinic". Good boy Vallie! I remember meeting Ann and Chloe at the the clinic to pick you up and bring you home like it was yesterday. We drove down Champion Forest Drive with you in the passenger seat beside me and I watched you the whole way home. Watched your sweet face, your turned up little nose and your torn ear and thought how lucky I was to have you. From that night on you slept beside me, every night, pressed against me until morning. You were MY dog. I was YOUR person. Right from the start. You delighted everyone in the house with all your bouncing up and down, just like a pogo stick. A bouncy, bouncy, boy just like Tigger from Winnie the Pooh! You claimed the leopard print loveseat in the living room as yours right away. Napping there everyday with one white leg ALWAYS hanging off the edge. You never did quite make the grade as "dog park material" but never mind, you found your first and very best friend in a dog named Hank. He taught you how to play, just like a regular dog. Playing pull and chase and the perennial favorite "bite your face". I never could understand that one but you guys loved it. Teeth clacking together, tails wagging, heads and ears COVERED with slobber. That might be the thing I'm happiest for you about, that you found a friend, a real true dog friend. I grieve for Hank too today. I wish I could explain to him what happened, that you didn't leave on purpose. That your heart just couldn't work anymore. That we had to make one more trip to the clinic, with you right next to me in the passenger seat. It was a beautiful day and we opened the sunroof and rolled down the windows and listened to music on the radio. And we sang our favorite song, the one we always hummed on walks. The one about "the little houses all made out of ticky tacky with the people that were all the same". And I would tell you "but not you Vallie. Not you. There's never been a dog like you! You're such a special, good boy and I love you so much!" I whispered that in your little torn ear when Dr. Sartor was helping you sleep too. I said "good boy Vallie. Good boy." Hoping that by now you had forgotten all the bad things that happened to you and only felt the good things. Felt being safe and warm and loved. I'm shedding tears as I write this now and I'm sure there will be more to come before I'm through. But when I am, I promise I'll pick myself up and with Miss Ann's help I'll find another boy or girl…. or both! And I'll make sure they have everything they need. And every time I ache for you it will remind me of the ones that are still out there. I'll do my best and work as hard as I can to help them because I know that's what you would want me to do. After all the love and loyalty you gave me it's the least I can do. I will miss you forever my sweet boy. Love, Mommy 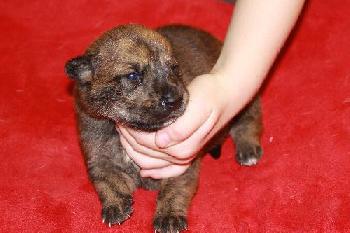 Venus
Venus, one of Libby's pups, has passed away. She did not live long but she was safe and loved while she was with us. 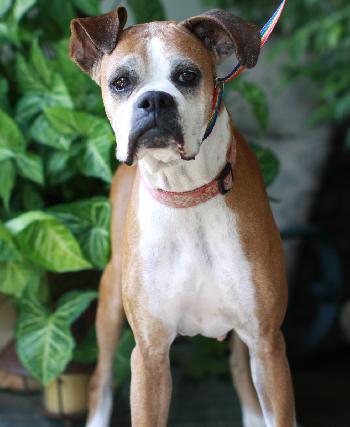 Vivi
We lost our Vivi much too soon. Only three months into our love affair with the sweetest, smartest and most beautiful boxer in the world (!), we lost her to cancer. You would have never known she was as sick as she was by her actions! She loved to run on the beach, chase her toys and play tug of war with just about anything. When she started exhibiting some signs of a problem, they were subtle, but we knew something was wrong. As the week progressed and no medicines were helping and Vivi seemed to be getting worse, Dr. Rosser did some more extensive tests, and she found masses in her stomach and lungs. So devastating to hear and decisions so agonizing to make--but we didn't want Vivi to suffer.

We first found Vivi on the LSBR website. After we lost Helga, another sweet, smart and beautiful talking boxer baby from LSBR, we thought we couldn't love another one as much. But we missed the boxer wiggle and that love only a boxer can give, so we cautiously began looking again. Vivi was older, was very sick when she was saved by LSBR and undergoing heartworm treatment, but, oh, that face! And that cock-eyed ear! We fell in love with a picture and knew we had to meet the real thing! We met Vivi with her foster mom and "sister", Ann and Chloe Callan. We knew they loved Vivi very, very much and Vivi returned that love to the family that saved her (Vivi followed Ann everywhere while we were there--her big eyes watching her wherever she went!) Chloe vetted us carefully, as did Ann, and lucky for us, we passed their muster. Vivi was going home with us that night. After we received all the instructions for her care, feeding and recreational activities (toys, toys, toys), we loaded her into the SUV and started the ride home. Vivi turned and watched Ann and Chloe until she couldn't see them anymore--and then she continued to watch out the back window, only turning around when we arrived at her new home. We wondered if she could ever love us as much. After only a short time, our worries appeared unfounded. Vivi turned on the charm, and we were in love! It was definitely a mutual admiration society at the Price house. For the short time we had Vivi (or Vivi had us!), we smiled more, hugged more, tossed toys more than you could imagine. And, we loved more. So, we're trying to convince ourselves that when you adopt a boxer, especially one that is a little more mature, that it's the quality of time rather than the quantity that matters. We're trying very hard, but most days we just miss Vivi very much.